Menu
Home
Cruises
Cruise Companies
Directions
Air tickets
Tours
Регионы
News
Visas
Information
Agents
Туристам
About us
Contacts
Promotions and discounts
UKR
|
RUS
|
ENG
Home > Порт "Ajaccio/Corsica, France"
The cruise port of Ajaccio is located on the west coast of Corsica. The largest port city on the island and is famous for being the birthplace of Napoleon. The port is located in the Gulf of Ajaccio.
Port address: Quai l'Herminier, 20000 Ajaccio.
Terminals: The cruise terminal is located on the L'Herminier waterfront next to the ferry terminal to the east and the fishing port to the west. The Ajaccio cruise port terminal is small but modern and known as the Gare Maritime.

Share:
Cruises with a visit to this port How to get there Attractions Excursions Reviews

Wait a few seconds...
From Ajaccio airport (Napoleon Bonaparte airport) to the city
- The center of Ajaccio can be easily reached by taking bus number 8, operated by the TCA Ajaccio bus service, which connects the airport with the main train station. The ticket price is 4.50 euros.
- Another way to get to the main station is to take bus number 12, which departs from the P + R Campo dell'Oro bus stop, located 15 minutes walk from the terminal.
- Order a taxi
- You can also book a group transfer from the cruise company with the manager of For Gates Ukraine.
- The best way is to order a transfer from the manager of For Gates Ukraine.
From port to city
Most of Ajaccio's attractions are within walking distance of the cruise terminal and a 5-minute walk from the city center. Therefore, you do not need a transfer.
You can also book a group excursion from the cruise company with the manager of Fort Gates Ukraine.
From Ajaccio to other cities in Corsica
- Near the port there is an intercity bus stop, from which you can reach any city in Corsica.
- From the sea terminal, you can order a transfer from the manager of Fort Gates Ukraine, or order a taxi on the spot, or at the cruise ship's reception.
- You can also book a group excursion from the cruise company with the manager of Fort Gates Ukraine.
Ajaccio
Cathedral of Ajaccio. The main place of worship in the city. Mannerist style of the building. Its plan is a Latin cross with a small transept. As you enter, on the right is the marble font where Napoleon Bonaparte was baptized.
House of Napoleon. It is located in the ancient village of Ajaccio, perhaps the most beautiful part of the city, close to the cathedral. Here Napoleon was born and lived in his early youth. The house, now used as a museum, displays family portraits, antique furniture, exquisite tapestries and objects that were used by the Napoleon family in daily life.
Ajaccio Imperial Chapel. It is located inside the Fesch Palace (where the eponymous museum is located, which boasts a very rich collection of paintings and works of art). It was the mausoleum of the Bonaparte family, although Napoleon's tomb is in Paris.
Citadel of Ajaccio. From the imperial chapel, walking along the promenade, you find yourself in the so-called Cittadella dock, from which you can admire the sea in a distance, and the bay with shallow boats or moored right on the coast. The Citadel consists of a dungeon (the highest tower of the castle) and a well-preserved city wall, which are the remains of the Ajaccio fortification system.
Napoleonic Museum of the Municipality of Ajaccio. Ajaccio Town Hall is a beautiful building with typical architecture from the 30s. It preserved the memory of the Bonaparte family and the first French emperor.
Sanguine Islands. There are several boat trips that go to these islands, famous for their castle at the highest peak and unspoiled nature. But above all, from the pier of Ajaccio, you can admire at sunset the Sanguinere Islands, which are painted in red, one of the most beautiful natural spectacles in Corsica.
Corsica
Scandola nature reserve. The Scandola Nature Reserve, comprising just under eight miles of the northwest coast of Corsica, has been declared a UNESCO World Heritage Site for its rugged beauty and biodiversity. Red cliffs and volcanic headlands of the coastline and bays, beaches, grottoes, islets and sea stacks, along which clear waters float. Dolphins will join you if you're lucky.
Citadel Bonifacio. Perched on top of the white limestone cliffs of the peninsula, with sheer 70-meter cliffs below, the location of the Citadel of Bonifacio is certainly impressive. The fortification was founded in the 9th century as the first line of defense for Tuscany. The citadel was even used as the administrative center for the French Foreign Legion.
Desert Agriate. The 15,000 hectares of protected wildlife under this name was formerly an area of ​​fertile farmland. The area remains uninhabited, but not devoid of life, as it is partially covered with shrubs, meadows and picturesque beaches. Evidence of previous residents can be seen in stone huts that could have been used as dwellings, sheds, or warehouses.
Palace of Fine Arts. Napoleon's uncle, Cardinal Joseph Fesch, is in charge of the creation of this Fine Arts Museum, which is now home to the largest collection of Italian painting in France outside the Louvre. Works by artists such as Botticelli, Bellini and Titian are displayed in an elegantly designed gallery.
Filitosa. Excavations began at this fascinating and mysterious site in the 1950s. Its characteristic feature is a group of discovered dolmens and menhirs - megaliths or standing stones. Since millennia, images of human faces, weapons and armor have been carved into granite slabs. Located in an ancient olive grove, the site is considered occupied from the prehistoric era to the Bronze Age. 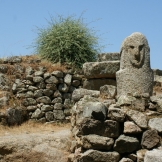 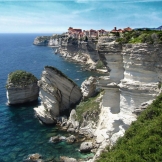 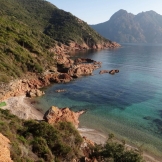 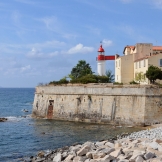 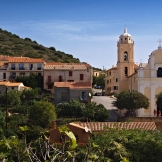 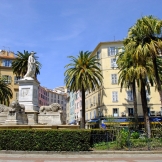 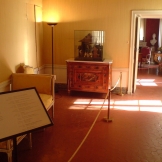 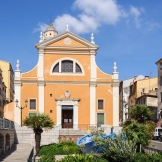