Menu
Home
Cruises
Cruise Companies
Directions
Air tickets
Tours
Регионы
News
Visas
Information
Agents
Туристам
About us
Contacts
Promotions and discounts
UKR
|
RUS
|
ENG
Home > Порт "Corfu, Greece"
Corfu (Kerkyra) is a port city on the island of Corfu in the city of Kerkyra in the Ionian Sea (eastern Mediterranean). The cruise port has a big impact on the economy of the island. The port is often included in cruise routes on the Adriatic Sea, as well as on routes between Italy and Greece.
Address: Port Authority of Corfu, Xen Stratigou 2, Corfu.
Terminals: The cruise ship terminal is located at Neo Limani (“New Port”) and also serves as a ferry port.
Share:
Cruises with a visit to this port How to get there Attractions Excursions Reviews

Wait a few seconds...
Corfu airport to port
The airport is located 3 km from the city of Kerkyra.
- You can take the bus. Routes 15 and 6 will take you directly to the city's central bus station, from where buses already run throughout the region. The ticket price is 1.5 euros.
- Taxi from airport to city center
- You can also book a group transfer from the cruise company with the manager of For Gates Ukraine.
- The best way to order a transfer from the manager of For Gates Ukraine (30 Euro / 1-3 passengers).
From port to city
- Outside the terminal, there are public buses at the end of the large port car park that will take you to the Old Port Square at the New Fortress for about € 1.50.
- You can walk on foot. The pleasant town of Kerkyra can be bypassed at a leisurely pace in one and a half to two hours.
- If you want to see the whole island or go to the beach, you should rent a car or go on an excursion. Buses to other parts of the island are rare.
- You can also book a group excursion from the cruise company with the manager of Fort Gates Ukraine.
Old town of Corfu. A junction of pedestrian streets and lanes between Venetian and neoclassical houses, painted in pale yellow and orange. Protected by irresistible ramparts, the New Fortress to the west and the Old Fortress to the east deserve your time.
Esplanade and Liston Street. Between the Old Town and the Old Fortress lies the Esplanade, a long green square that is a remnant of 17th century Venetian fortifications. The Rue Liston, located on the western border of the Esplanade, is an elegant arcade of the French period.
Church of St. Spyridon. The main church of Corfu dates back to 1580 and its Renaissance bell tower is the tallest in the Ionian Islands and houses the relics of Saint Spyridon, brought to Corfu from Constantinople in the 15th century.
Achillion. This neoclassical palace was designed by the Italian architect Raffaele Carito with the hero of Achilles as its central theme. You can tour the gardens enriched with balustrades, colonnades, fountains and statues of Herter among palm trees and trimmed cypresses. The interior of the museum is full of memorabilia relating to Elizabeth of Bavaria, Francia Joseph II, as well as Kaiser Wilhelm II.
Mount Pantokrator. The highest peak of Corfu is in the north of the island, it reaches 906 meters. At the top there is a cafe, a telecommunications station and a monastery from the end of the 17th century. When you reach the top of the mountain, you will see the Ionian Islands, mainland Greece, Albania, as well as Apulia at the "heel" Italy 130 kilometers west.
Paleokastritsa Monastery. Towering over a rugged promontory on the northwest coast, Paleokastritsa Monastery dates from the 13th century and sits on the site of a medieval castle that has long since disappeared, and has a small brotherhood of eight monks who offer guided tours of the buildings and lush gardens.
Paleokastritsa beach. To the east of the monastery is the graceful Paleokastritsa beach. The beach, although narrow, has soft golden sand, in contrast to the cove with pebbles nearby.
Angelokastro. Built in the 13th century, this castle was built on a narrow rocky spur over 300 meters above sea level, where you can see seven sarcophagi hewn from the cliff, look into the castle's vaulted cistern and gaze in awe of the sea, coastline and mountains.
Pontikonisi. For 2.5 euros, you can take a boat to this small island where a 12th century Byzantine monastery is surrounded by pine and cypress trees.
Kassiopi. In the northeast of the island, Kassiopi is a traditional fishing village that has turned into a low-key resort. The built-up area sits at the foot of a small peninsula engraved with small pebble coves, and on the east side is a charming fishing harbor.
Canal d'Amour. One of the most beautiful and famous beaches on the island of Corfu, the picturesque Canal d'Amur or "Channel of Love" is known not only throughout Europe, but all over the world as the beach of lovers who want to connect their hearts once and for all. Located in the north of the island, not far from Sidari, about 32 kilometers from the main city, the beach is distinguished by its relief cliffs that rise on both sides, forming a natural channel, like a fjord. 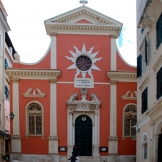 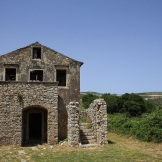 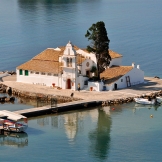 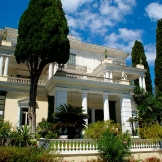 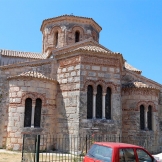 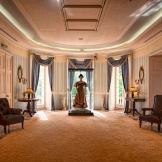 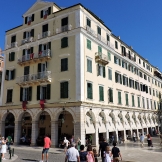 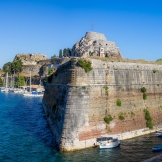 еще 4
скрыть
Bus tour with a Russian-speaking guide - 5 hours
This trip will present a wonderful kaleidoscope of impressions for both nature lovers and people who are fond of history.
The charming cosmopolitan city of Kerkyra captivates its guests once and for all. The old town is teeming with museums, cultural sites and fine dining restaurants. British neoclassical buildings line the spacious promenade of Spagnada. There is also an elegant Passage Liston, built by the French in the likeness of the Parisian Rue de Rivoli. From the north, Spagnado is rounded off by the magnificent neoclassical Palace of St. Michael and George. On one of the streets nearby is the church of St. Spyridon of Trimifuntsky, the patron saint of the island, where the relics of the saint are kept.
On the eastern edge of the park stands the Old Fortress, built by the Venetians in 1550-1559. and guarding the city from the sea. From its top, there are magnificent views of the city and the east coast of the island.
The next stop is at the observation deck on the Kanoni Peninsula with the famous view of the islet of Pontikonisi ("Mouse Island") and the monastery of the Blakherna Mother of God.
At the end of the excursion, visit the Achillion Palace. The palace was built at the end of the 19th century for the Empress Elisabeth of Austria. The palace was named after Achilles, Elizabeth's favorite ancient hero. Here you can wander through the halls of the palace and the paths of the park and admire the mannered sculptures.
Cost per group, depending on the number of people:
1-3 people - 385 Euro
4-7 people - 495 Euro
8-15 people - 610 Euro
* Additional payments (tickets): Achillion Palace - (7 euros) 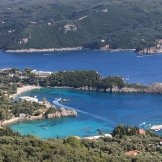 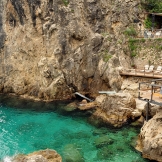 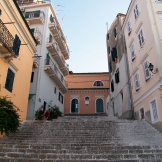 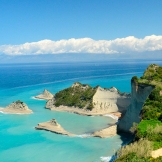 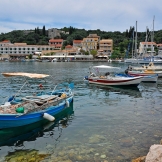 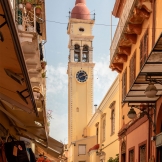 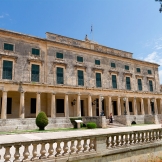 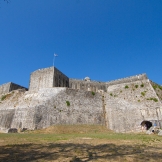