Wait a few seconds...
from Marseille Provence airport
- From the airport a bus (express shuttle) will take you to the Saint-Charles train station (8.50 €). From the Saint-Charles train station you need to take the metro: line 2 towards Bougainville, stop "Place Joliette". Then take city bus (RTM) no. 35 towards L'Estaque, stop Littoral Gourret. This stop is about 800 meters from the nearest and 2 km from the far cruise terminal.
- Order a taxi
- Order a transfer from the manager of For Gates Ukraine
to Marseille from the port on a cruise
- By public transport
- Order a taxi (20-25 Euro / one way)
- Free port bus that takes tourists from the cruise terminals to Joliet Square. But it runs only on certain days, and if you are unlucky, you will have to take city bus # 35. From the liner you will need to walk along the green pedestrian path to the port exit for about 1-2 kilometers. The distance depends on where your liner will be moored. From Place Joliet you can start walking around Marseille.
- Transfer from the manager of For Gates Ukraine
Le Panier. Le Panier provides an insight into Old Marseille and the true Marseille culture. Le Panier is a delightful place to stroll, from narrow, winding streets that stretch to squares, restaurants, ateliers (workshops) and terraced houses.
Vieux Port. The Vieux Port began docking ships and boats as early as 600 BC and it was a bustling city center until steamboats became the preferred mode of transport and the Vieux Port was considered too small. A port with many swinging sailboats, restaurants, bars and shops located on the shore.
Abbey of Saint-Victor. The Abbey of Saint-Victor is an active Catholic church, which was founded in the 11th century as an abbey and named after the Roman soldier and Christian martyr Victor of Marseilles. Most of the abbey was destroyed in 1794, austere churches and crypts have survived.
Basilica of Notre Dame de la Garde. The Basilica of Notre Dame de la Garde - translated as "Our Lady of the Guards" - was built in the 1850s on the foundations of the ancient fortress of Marseille. Today, this active Catholic basilica, filled with stunning marble, frescoes and mosaics, is the symbol of the city, the crown of its skyline, and also a great place to enjoy the stunning views of the city below.
Fort Saint-Jean. Fort Saint-Jean, built in 1660 by Louis XIV, is a well-preserved fortress guarding Marseille at the entrance to the Old Port. Interestingly, it was not built to keep the invaders at bay, but to suppress a local uprising. Today, the legendary fort is a tourist attraction, where travelers stretch their legs and rest rather than prepare for battle.
Kalanki National Park. Imagine jagged limestone cliffs descending onto secret pebble beaches washed by the aquamarine waters of the Mediterranean and you begin to get an image of the Calanques National Park. While many travelers look at this national park from the sea, others say that the hikes are absolutely magical too.
MuCEM. The Museum of the History of Civilizations of the Mediterranean (MuCEM), is a museum of the history and culture of Marseille that takes visitors on an anthropological journey through the history of the Mediterranean. Architect Rudy Ricciotti designed a modern building that connects the 13th century Fort Saint-Jean via a pedestrian bridge.
Cathedral of Marseille. The construction of this colossal cathedral began in 1852 in the Romanesque-Byzantine style, designed by the architect Esperanda at the behest of the future Napoleon III, who wanted to conquer the church and Marseilles, as well as develop trade with the East. This ostentatious building was partially built on the site of the former Great Cathedral, whose Romanesque remains are still visible. Since 2014, the new embankment has brought a new sense of space to the cathedral.
Chateau d'If. Château d'If is a 16th-century fortress commissioned by King François I, located on the smallest island in the Frioul archipelago, less than a mile from Marseille. Visitors to Marseille often travel by boat to this beautiful and mysterious monument, especially since it inspired the environment of the famous book by Alexandre Dumas "The Count of Monte Cristo". 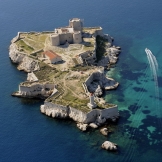 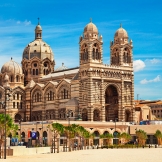 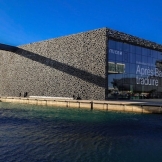 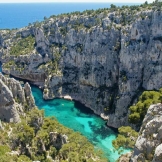 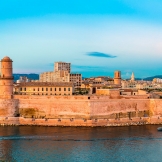 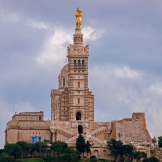 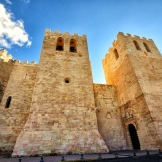 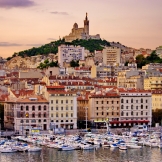