Menu
Home
Cruises
Cruise Companies
Directions
Air tickets
Tours
Регионы
News
Visas
Information
Agents
Туристам
About us
Contacts
Promotions and discounts
UKR
|
RUS
|
ENG
Home > Порт "Split, Croatia"
Split is a cruise port on the Adriatic Sea located in Croatia. The city is located on the Marjan Peninsula between the Kastela Bay and the Split Canal at the foot of the Mosor Mountains.
Address: Obala kneza Domagoja 16-17, Split cruise port map 21000, Split.
Terminals: Smaller cruise ships dock outside the ferry terminal at Split's ferry port. Larger cruise ships anchor in the harbor while their passengers sail ashore.
Share:
Cruises with a visit to this port How to get there Attractions Excursions Reviews

Wait a few seconds...
From the airport to the city
The airport is located 20 km from the port.
- Taxi from Split airport to the port will cost about 25 euros.
- The bus between Split Airport and the main bus station is operated by Pleso prijevoz. The bus schedule varies depending on the season.
- You can also book a group transfer from the cruise company with the manager of For Gates Ukraine.
- The best way to order a transfer from the manager of For Gates Ukraine (60 Euro / 1-3 passengers).
From port to city
The port is located in a closed bay of the city of the same name, just a 5-10 minute walk from the historic center, so a transfer is not needed. You can take a walk and enjoy the atmosphere of the city. From the sea terminal you can order a transfer from the manager of Fort Gates Ukraine, or order a taxi on the spot, or at the reception of the cruise ship
Diocletian's palace. There is nothing like this in Europe: it is a perfectly preserved complex of the 4th century. The scale is such that it is more of a citadel than a palace, and surprises await around every corner. It goes without saying that the palace is on the UNESCO list and you can even walk along the original Roman streets that run through the complex. Not surprisingly, scenes from Game of Thrones were filmed in this stunning location.
Piazza Square. It will take you at least a few hours to get a taste of the old city and there is no better way to do this than on foot. Head to Piazza Square, where Split's old town hall overlooks an exquisite gleaming marble plaza and café with outdoor seating. There is a lot of beautiful architecture of the Renaissance period, remnants of the Venetian era of Split.
Split Cathedral (Cathedral of St. Duym). The central part of this building dates back to 350, making it the oldest cathedral in the world. It is very gratifying to see how Roman elements, such as the original ring of 24 pillars of support, mix with the hallmarks of a Catholic temple. Also take some time to explore the cathedral's Romanesque wooden doors, which have been intact since 1200.
Peristyle Square. This is the original Roman courtyard where you can enjoy the architectural grandeur of old Split. Diocletian made his public appearances in this very square, and his loyal subjects fell on their faces before the former emperor. There are still two Egyptian sphinxes brought to the city by Diocletian.
Hill Marjan. To the west of the city is this steep 170 meter high hill with cypresses and Mediterranean pines. Especially interesting is the Jewish cemetery on the eastern side of the hill. There have been no graves since 1945, but many of the gravestones are still legible, and some date back to the 1700s. There are also two churches on the hill: St. Nicholas from the 1200s and St. Jerome from the 1400s with an altarpiece Renaissance carved by the Venetian Andrea Alessi.
Bell tower. Adjacent to the cathedral is Split's famous bell tower, a beautiful sight, six stories high, which tapers off as the upper levels scale. On the way up, you will be exposed to the elements and you will be able to peer through the tower's twin arched windows, which are a classic feature of Romanesque design and have not changed much since the 1000s. At the top, your reward will be Split's views of the city and the Adriatic Sea, which are worth a bit of a cumbersome climb.
The statue of Grgur Ninsky. Grgur Ninsky is a 10th century bishop, a Croatian icon who, by conducting religious services in the Croatian language, challenged the pope, helped spread Christianity in the region, and established Croatia's national identity.
Klis fortress. It is located on a rise above the terraces of the hills of the city of the same name and is framed by even higher cliffs of pale gray rock. The ancient Illyrians were the first to build a fortress here, and throughout the medieval era, Klis was the seat of the Croatian kings.
Waterfall in Krka National Park. This national park is located an hour's drive from Split, along the river Krka. A large natural pool measuring 400 x 100 meters, fed by travertine waterfalls at one end and then emptied by cascades at the other. Only in this place there are 17 waterfalls, and the highest one reaches almost 50 meters.
Museum of Croatian Archaeological Monuments. About 20,000 items have been collected by the Museum of Archaeological Sites, of which only a quarter can be exhibited. Most of them are from the Middle Ages and usually include jewelry, weapons, armor and household items. In terms of Croatian culture, the most valuable are various stone inscriptions, reliefs and carvings belonging to Croatian kings, nobility and clergy from the 800s to 1100s. 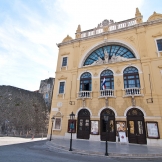 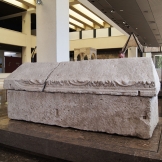 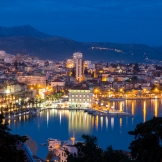 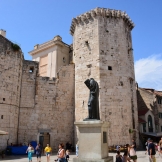 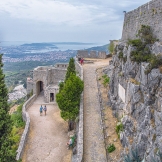 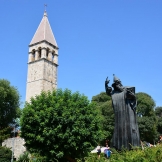 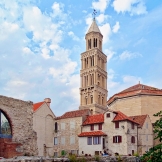 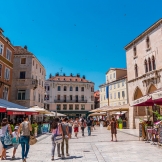 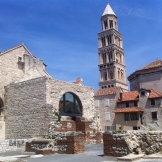 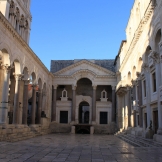