Menu
Home
Cruises
Cruise Companies
Directions
Air tickets
Tours
Регионы
News
Visas
Information
Agents
Туристам
About us
Contacts
Promotions and discounts
UKR
|
RUS
|
ENG
Home > Порт "Cagliari, Italy"
Cagliari is the main port of Sardinia and is located on the southern coast of the island, in the most central part of the Gulf of Golfo di Cagliari. It is a busy commercial port with ferry connections to the mainland and Sicily. The port of Cagliari is the most important port of Sardinia and one of the largest in the Mediterranean.
Port address: Porto, Molo Rinascita, 09123 Cagliari CA.
Terminals: The Rinascita cruise terminal is located near the city center, a 15-minute walk away.
Share:
Cruises with a visit to this port How to get there Attractions Excursions Reviews

Wait a few seconds...
From Cagliari airport to city
- The buses offered at the airport are convenient and it is only a ten minute drive from the airport to Piazza Matteotti in the center of Cagliari (line 160, approximately 1 euro).
- Easy to reach by train thanks to Elmas Aeroporto train station. The trip to the city center and back takes about 5-7 minutes, the cost of a one-way ticket is 1.30 euros.
- You can also book a group transfer from the cruise company with the manager of For Gates Ukraine.
From port to city
- The city center is close to the cruise port of Cagliari. You can get from the port to the center by bus or taxi, you can also just walk to appreciate the old city from a different point of view. Although the city center is only a 10-20 minute walk away, the old part of the city has steep hills, so you need to wear suitable footwear.
- The Port Authority of Cagliari offers free shuttle buses from your cruise ship to the roundabout in Piazza Matteotti, located next to the train station, bus terminal and city center.
Bastion of San Remy. Building with limestone arch and columns, terrace and area for cultural events. It is the ideal location for sightseeing - the harbor, the Marina quarter below, the Villanova area on the left and the Temple of Our Lady of Bonaria.
Tower of Torre del Elefante. The tower was part of the fortifications. Along with the carved elephant that gives the tower its name (on the lower side), look for the coats of arms of old families, including the mighty Visconti from northern Italy.
Cathedral. Very interesting are the reconstructed 13th century walls on the left and on the bell tower, where you can see parts of the reworked pre-Christian and carved Roman tombs, one of which is built upside down. Artistic and historical treasures fill the cathedral, among them exquisite silver in a small Gothic chapel and two crypts that hold nearly 200 early Christian martyrs excavated from the old church of San Saturno and identified as saints.
Archaeological Museum. The beautifully displayed Greek and Roman collections are very well interpreted, but what makes this museum a must-see for tourists is the wealth of information about Sardinia. Here you will find an impressive collection of ancient gold pieces, bronze statues and other treasures.
Cittadella dei Musei. In addition to the Archaeological Museum, this rebuilt bastion contains several others. Of these, the most interesting for tourists is the National Art Gallery, which displays magnificent gold and carved painted altars from ruined Baroque churches in Cagliari.
Roman amphitheater. Built at the end of the first century, in a natural curve on a rocky hillside. It is the most important Roman city, and when not closed for archaeological research or restoration work, it is used for concerts and performances. Sometimes it can be visited with a guide when it is closed for restoration.
Mercato di San Benedetto (San Benedetto market). For a glimpse of local life as well as the huge variety of seafood on offer, take a morning drive to the city's main indoor market, MercatodiSanBenedetto.
Temple of Our Lady of Bonaria. The church houses a revered statue believed to have stopped the storm in time to rescue the crew of a Spanish shipwrecked in the Gulf of Sardinia, near Cagliari, in the winter of 1307. A small Spanish Gothic church dates from the 14th century, and a large neoclassical basilica was built in the 18th century. The sanctuary museum contains archaeological finds. 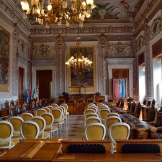 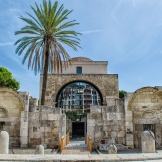 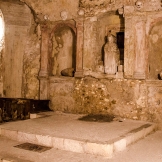 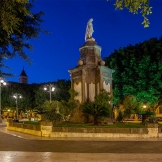 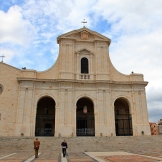 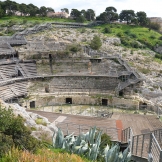 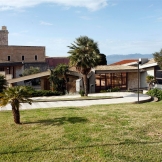 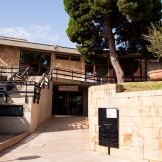 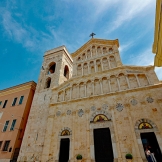 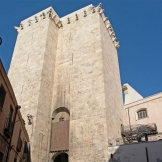 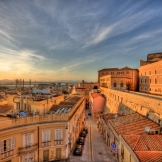 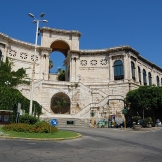