Menu
Home
Cruises
Cruise Companies
Directions
Air tickets
Tours
Регионы
News
Visas
Information
Agents
Туристам
About us
Contacts
Promotions and discounts
UKR
|
RUS
|
ENG
Home > Порт "Venice, Italy"
Venice is a major seaport on the Adriatic (northeastern Italy) and one of the most visited ferry and cruise ports in Italy, serving routes across the Mediterranean and connecting North Africa and the Middle East.
Address: 13 Santa Maria Fabbricato, 30123 Venezia.
Terminals: Venezia Passeggeri or Venice Cruise Terminal is located just off the 4 km road that links the historic city to the mainland. Consists of two main areas: the Marittima Basin, which can handle the largest ships that call Venice, and the San Basilio Pier, which is just around the corner in the Giudecca Canal.
Share:
Круизы с посещением данного порта Как добраться Достопримечательности Экскурсии Reviews

Wait a few seconds...
From Venice Airport (Marco Polo) to the port.
- Order a taxi, travel time 15-20 minutes. The tariff will be in the range of 30-40 euros.
- Water taxi. Takes about an hour from the airport but offers a scenic drive. (Water taxis are expensive - € 100 or more, depending on the number of people and suitcases on board).
- By express bus AVTO or yellow ACTV bus # 5 to Piazzale Roma. Then it is more convenient to take the monorail (People Mover) to the terminal (stop Marittima).
- You can also book a group transfer from the cruise company with the manager of For Gates Ukraine.
- The best way to order a transfer from the manager of For Gates Ukraine (51 Euro / 1-3 passengers).
From Piazzale Roma to the port.
- Marittima is just a few minutes away from Piazzale Roma by taxi. The free shuttle bus usually runs on Saturdays, Sundays and Mondays during the cruise season.
- You can walk to Marittima from Piazzale Roma in 10-15 minutes. Just follow the road that leads to the dam and turn left at the port entrance after you cross the train tracks.
From St. Mark's Square to the port.
- You can take a water bus to Piazzale Roma and get there by taxi, bus or on foot if you are not traveling with a lot of luggage.
- Express boat number 2 is the fastest
- Vaporetto (waterbus) number 1 on the Grand Canal - this is convenient if you are staying near one of the intermediate stops.
From Treviso airport to port.
- You can get there by bus, the cost of the trip is 10 euros. Travel time: 40-70 minutes. Most often, buses stop in Mestre and then leave for Piazzale Roma.
-You can also take city bus 6 to Treviso train station. Then by regional train - to Venice (St. Lucia). And further from the station to the port.
- Order a transfer from the manager of For Gates Ukraine (103 Euro / 1-3 passengers).
From the St. Lucia to the port.
If you are at the St. Lucia, then you can get by shuttle boats (vaporetto) to Piazzale Roma (1 stop), where the port shuttle bus stops and there is also a taxi stop and a monorail * that goes to the port, as well as a water taxi directly to the cruise terminal.
From Mestre train station to the port.
If you are at the Mestre train station, you can take a taxi (about 20 minutes)
And also take a public bus to Piazzale Roma (which is located near the port).
* Monorail (original name People Mover) is a fast and convenient way of communication between 3 stations: Piazzale Roma - Venice Cruise Terminal - Tronchetto outdoor parking (the point of arrival for most tourist buses). The monorail is an automatic train similar to a funicular. The fare is 1.5 euros.
St. Mark's Cathedral (San Marco) is the most famous building in Venice. It is a stately piece of architecture that has stood the test of time since its inception in 1092 and remains one of the most important religious buildings in Northern Italy.
San Marco Square. While the Cathedral of San Marco is the most famous building in Venice, the Piazza San Marco is the most famous square. Located in front of the island of San Giorgio Maggiore, this square is of great importance in Venice and is a truly impressive place to visit.
The Grand Canal. Venice has literally hundreds of canals that connect the various islands that make up the city. The largest of them is the Grand Canal. This monumental canal looks more like a river, it runs from one side of Venice to the other and runs through the center in a large bend.
Ponte di Rialto bridge. Ponte di Rialto, one of the bridges over the imposing Grand Canal, is undoubtedly the most famous and iconic. Connecting the San Marco and San Polo districts of Venice, the bridge is an important pedestrian artery as well as an extremely popular tourist attraction.
The Doge's Palace is one of the most famous buildings in Venice, also located in Piazza San Marco, but overlooking the Grand Canal. This ornate palace is simply stunning and its façade features a beautiful arched design in white stone with a series of rhombuses on the walls.
Bridge of Sighs. Although the Bridge of Sighs is only a small bridge in the relative layout of Venice, it is one of the most visited structures in the city and an important historical landmark.
Campanile of St. Mark's Cathedral. As the tallest structure in Venice, the bell tower is a towering building that reaches a whopping 98.6 m. The building that stands now is actually a renovation, as the original collapsed in 1902. Originally built in the 9th century, the bell tower was used as a watchtower.
Chiesa di Santa Maria Assunta. The Church of Santa Maria Assunta, located in the Venetian region of Cannaregio, is a beautiful structure. The front façade of the church has several stone columns, ornate sculptural statues of religious figures and many intricate details - a huge bronze door serves as the main entrance.
Santa Maria della Salute. Cathedral of Santa Maria della Salute, located on the opposite side of St. Mark and stands out from the surrounding architecture. This baroque church was built in 1687 and designated as a small basilica of the Roman Catholic Church. 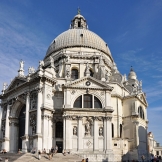 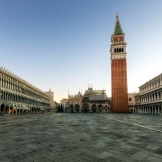 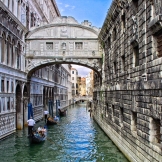 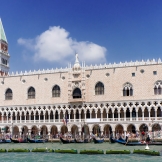 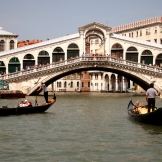 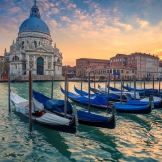 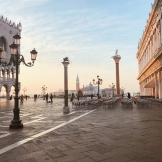 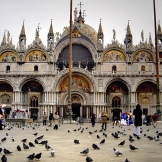